I was a lucky kid! My father was a keen sailor and my mother a talented first mate.

They took us to the British Virgin Islands in the seventies, me age nine and my brother six years old. We got to snorkel and swim in the most beautiful waters with an abundance of sea life and to experience life onboard a sailing yacht for two weeks. We explored the beautiful tropical archipelago and marvelled at the landscape nature had created.

I got to read “JAWS” totally prematurely sneaking the paper back from my dad’s luggage. Not recommended at this age! I’m uncomfortable to swim even in sweet waters after dark ….

We had a professional skipper for the first week. A nice guy named Charly who brought his dog named Tinkerbell. He slept in the saloon. The second week my parents were left to their own devices after they had honed their skills with Charly.

And those they needed.

It was not planned that a storm would suddenly build up in the afternoon of the first day without skipper! It was September 13th and I quote Wikipedia: “…The fifth tropical storm, fourth hurricane, and second major hurricane of the season, Eloise formed as a tropical depression on September 13 to the east of the Virgin Islands. The depression tracked westward and intensified into a tropical storm while passing to the north of Puerto Rico. Eloise briefly attained hurricane intensity soon thereafter…” 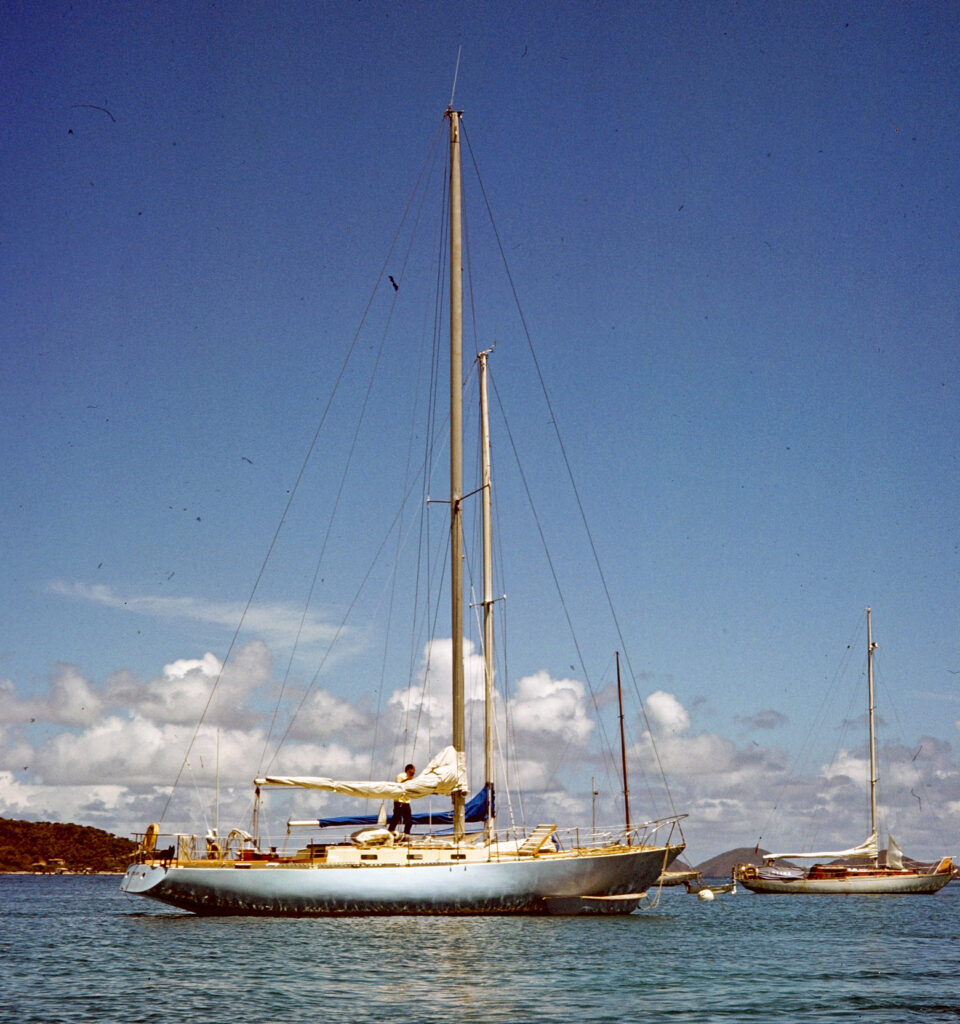 My parents sent my brother and me below deck. They were dressed in yellow rainwear, hats, and all. The boat rocked like a nutshell in the swell. The wind was blowing us onto a reef and the motor seemed too weak to bring us out of the danger zone.

When my dad came below deck to contact the charter company, we heard a “Mayday, Mayday” on the radio – it came from a yacht that was sailing along the reef in full sails in front of us. My father commented drily: “Total idiot or genius sailor!” Not a genius sailor after all – he grounded his boat in front of the beach bar, we saw it a few days later.

The charter company guided us out of the danger zone in the protected bay of a nearby island. I don’t recall how they worked it out with my father, good thing they did! I can’t recall the name of the island, but it was a distinctive sound, when an employee of the only hotel in the bay came to help us with the mooring. His wooden leg eerily drummed onto the pier. I had read “Treasure Island”. He turned out to be helpful, quite harmless, and friendly.

Surprisingly, I don’t remember being scared at any moment of this adventure. This is probably owed to the calm posture of my parents in this dangerous situation. But also, I never get seasick and I find myself strangely elated whenever I feel the force of the sea, be that the powerful waves hitting the Atlantic coast in France or on a boat in bit of a weather.

My little brother at the time had tubes in his eardrums because of a chronic ear infection. No water should come into his ears. This did not hold my parents back from letting him snorkel in the marvellous waters. Wax, cotton balls and a very tight-fitting swimming cap sealed his ears before he wore the snorkelling mask. I’m glad he could share this experience. We still reminisce until this day!

One of the best things on this sailing trip was the lack of distraction and a scarcity of toys that inspired my brother and me to play quite creatively with whatever we found. We had a few plastic Disney figures, Mickey, Donald, and some more. I remember us gathering a lot of natural materials and building houses and entire villages staging all sorts of stories involving our little plastic figures…

For years after this vacation I read every sailing adventure I could find, watched all pirate movies that were available on tv and for a large part of my youth dreamed of living on a boat…

Laura Dekker: The youngest sailor to sail alone around the world
08.03.2021