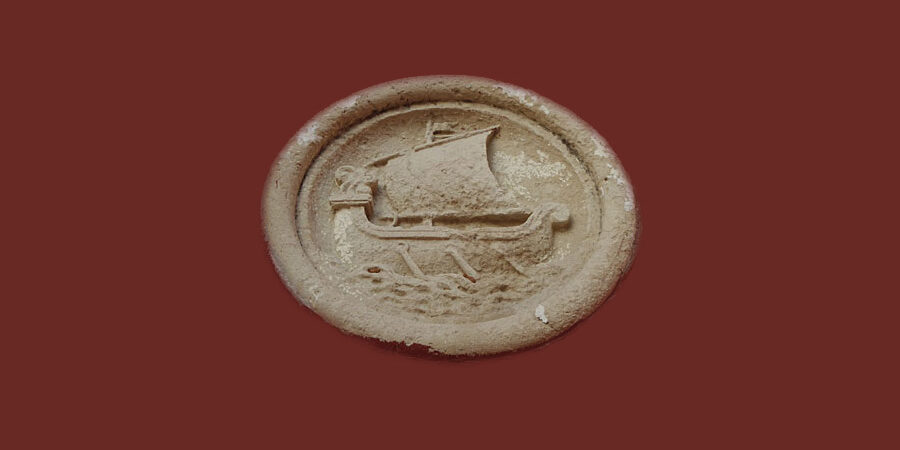 Thanks to Homer’s descriptions we derive important information about this people, their king, Alcinous, their city, their culture, but also about the particular hospital nature and the exceptional naval skills of the Phaecians.

As Hommer narrates, Odysseus left from the island of Calypso, Ogygia (identified by some researchers as the island of Othonoi in the northwest of Corfu), with a raft in order to continue the journey of his return. Odysseus faced Poseidon’s (the God of Sea – Neptune) wrath, but with the help of the goddess Athena and after two days of distress in the wild sea he finally finded shelter on the shores of the island of the Phaeacians and he fell asleep on a calm beach under the trees. In the dawn, he woke up from the voices of Nausicaa, the daughter of Alcinous, King of the Phaeacians, and the girls accompanying her. The king’s daughter treated the stranger, gave him oil to wash himself, clothes and food and invited him to the palace. Upon arriving in the palace, Odysseus presented himself to the King Alcinous and the Queen Areti, who welcomed him and generously offered their hospitality without asking anything about the identity of the stranger.

Phaeacian ships have no helmsman or steering oar, for the ships themselves know our thoughts and wishes.

The next day, Alcinous called an assembly of his Phaeacian counselors, where he proposed providing a ship for his visitor so that he may return to his homeland.

«“Leader and Counsellors of the Phaeacians, listen while I speak as my feelings prompt me. This stranger, whose name I do not know, has come to my house in his travels from east or west. He asks for his passage home, and seeks our permission. Let us further his going, as with others in the past. For no one who comes to my house waits here long, grieving for lack of help. So, let us run a black ship down to the glittering waves for her maiden voyage, and choose fifty-two young men from the town, who have proved themselves before. And when they have duly lashed the oars in place, come ashore quickly to my house and ready a feast: I will provide enough for all. These are my orders for the crew, and you sceptred Princes come on now to the fair palace, and let us entertain the stranger there: let no one refuse. And summon, Demodocus, the divine bard, for a god has given him supreme powers of song, to give delight, in whatever form his spirit prompts him to sing.”
With this he led the way, and the sceptred Princes followed, while a herald went to bring the divine bard. And the chosen fifty-two went, as ordered, to the shore of the barren sea. And when they had reached the ship and the shore, they drew the black vessel down to the deep water, and set up mast and sail in her, and fitted the rows of oars through their leather straps, and raised the white sail. They moored her well out in the roads, then made their way to shore and the great palace of wise Alcinous.»

Later that night Odysseus asked Demodocus, the bard, to sing about the Trojan horse and the sack of Troy, but as he was listening to him, he broke into tears. King Alcinous ordered for the music to stop and asked Odysseus at last to tell him who he is, where he is from, and where he is going.

«“Now, sir, for your part: don’t mask the answer to what I ask with clever subterfuge: plain speaking serves us best. Tell us the name you go by at home, the name your mother and father, and the rest, in the town and countryside, give you. No one who’s born into this world, whether high or low, goes nameless: our parents give us all a name once we are born. Name your country, your people and your city, so our ships may take you home, steering a course by means of their own intelligence. Phaeacian ships have no helmsman or steering oar, for the ships themselves know our thoughts and wishes, and the cities of men, every fertile country, and hidden by mist and cloud they speed over the sea’s wide gulf, and never fear damage or shipwreck.”»

Odysseus revealed his identity and recounted his adventures, and the next day the Phaeacian ship departed for Ithaka.

Safe and sure she sped on her way, and not even the wheeling falcon, the swiftest winged creature, could have caught her.

« As soon as they reached the ship and the sea, the noble youths who escorted him stowed everything in the hollow ship, down to the food and drink. Then they spread a rug with a linen sheet on deck, at the stern of the hollow ship, so he could sleep sound, and he went on board and quietly lay down. They sat to their benches, each in his place, and the hawser was loosed from the stone mooring ring, and as soon as they leant into the stroke and struck the brine with their blades sweet sleep fell over his eyelids, a deep sweet sleep like death.
Like a team of stallions, a four in hand, that leap forward together over the plain at the lash of a whip, and with heads held high forge their way, so the ship’s stern leapt in the water, and the glittering wave of the breaking sea foamed violently in her wake. Safe and sure she sped on her way, and not even the wheeling falcon, the swiftest winged creature, could have caught her. So, she cut quickly through the waves, carrying a man wise as the gods, who had suffered many heartfelt sorrows in war and on the surging waves, but now he slept, at peace, his mind empty of all his troubles.
And now, as the brightest planet rose, the first to herald dawn’s early light, the sea-going vessel approached Ithaca.»

So the story goes. Homer’s “Odyssey” handed over to the city of modern Corfu its emblem: the ship without a helm, a symbol of the spiritual power and the naval craftsmanship of the Phaeacians.

Sail with us in Corfu and the Ionian - See our yachts
Go on a Sailing Adventure with your kids! See our special family sailing offer!