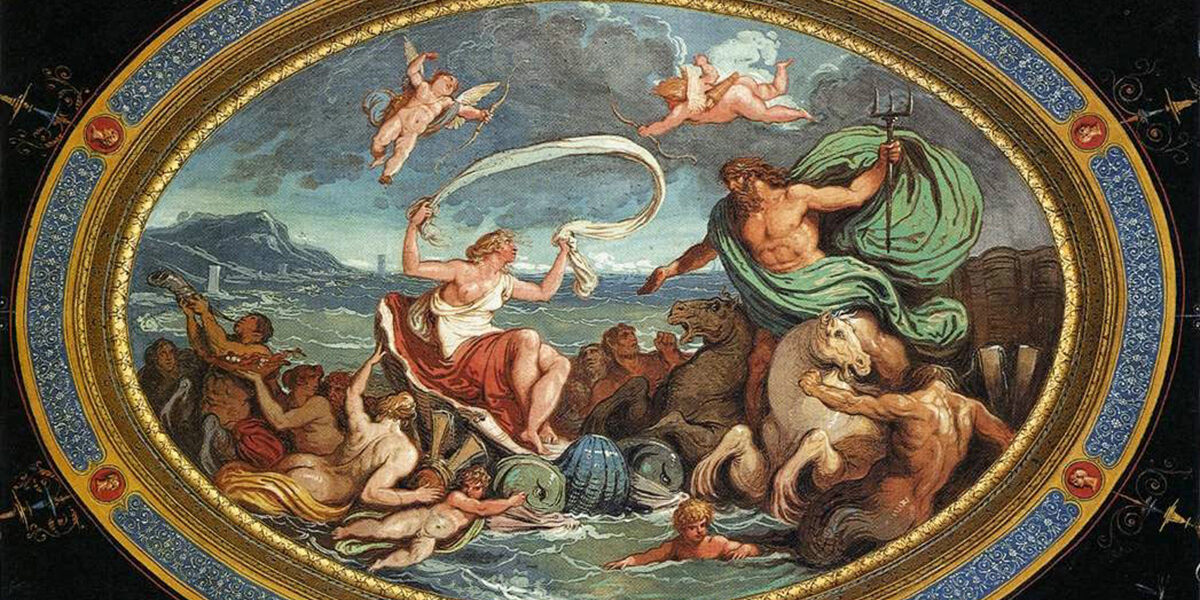 Many years ago the ruler of the universe was Saturn, but his sons Zeus, Hades and Poseidon declared war on him and they won.

The brothers decided to divide the world among themselves so that each of them would rule a kingdom. Hades took the Underworld, Zeus the Uranus (Sky) and Poseidon the Sea.

Poseidon loved everything to do with the sea. His main symbol was the trident, which was both a scepter of recognition and a means or weapon of enforcing his will. With it, by spurring the sea or rocks accordingly, it caused natural disasters, storms, earthquakes, sinkings, volcanic eruptions, etc. but also vice versa peace, calm, solidity up to the emergence of land, or gushing of water.

Poseidon built for himself a majestic palace of shells, silver and precious stones. Everything was perfect, but after a while his huge palace seemed empty and lonely. He then decided to find a bride and started looking for the woman of his dreams.

As he traveled the seas, he met the Nereids dancing. Nereids were sea nymphs with water legs, daughters of the meek sea god Nereus. One of them was Amphitrite. She was a beautiful and proud woman and attracted the attention of Poseidon who recognized in her the qualities of a queen. He confessed to her his love and his desire to make her his wife.

But Amphitrite loved her independence and despite Poseidon’s prestige and wealth she did not want to marry him. So she ran and hid to the end of the world at the bottom of the sea.

Poseidon did not give up. He sent a messenger to find her and lead her to his palace. There he would surely win her love. The messenger was the lord of the dolphins Delphinos.

Delphinos obeyed and began his long and difficult journey. Many weeks passed but he finally located the nymph. At first, he approached her and started singing the sweetest songs to seduce her. Amphitrite, hidden among the algae, heard him and he, seeing her, came even closer and touched her gently. Fascinated by Delphinos gentle nature, Amphitrite got closer to him to better hear his song.

“Beautiful nymph,” said Delphinos then, “Poseidon loves you. Although at times he is resilient, if you marry him you will help the world a lot. Think about how much your strength, beauty and stability will balance his own nature. The waters will calm down. Imagine a sea where no one will be tortured, where everything is calm and peaceful. If you become the goddess of the sea, everything will be fine. I promise you that you will be happy “.

The words of Delphinos deeply moved Amphitrite. “I will follow you to the palace and marry Poseidon,” she said. So it happened.

With Amphitrite in his arms and looking to an urgently needed love refuge, the God of Sea hit the southern tip of the island of Corfu (Cape Asprokavos) with his trident and separated a piece of land. And thus Paxos, the island of love, was formed. And from the great shock of the hit a three chamber sea cave was created in the newborn island: The emerald caves of Achai bay, that became the palace of Poseidon and his beloved queen.

However, in the process Poseidon lost his trident which was later found by the inhabitans of Paxos, who made it into their island’s emblem; the emblem of Paxos is a trident with a dolphin to each left and right.

As for Delphinos, Poseidon, in order to express his gratitude for the help he had offered him, immortalized him by placing the image of the dolphin among the constellations.

Paxos and many other wonderful destinations await you to discover them! Sail with us in Corfu and the Ionian - See our yachts 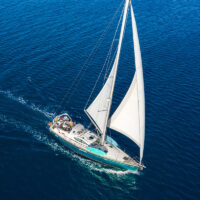